Static Geometry Batcher is a tool that generates batched meshes out of selected, individual meshes available on the scene, based on the materials they use. If some meshes share the same material(s) they can be batched. This improves rendering performance by reducing draw calls, what is particularly crucial on mobile platforms. The batcher can be used along the built-in Unity static batching mechanism.

To balance culling and the draw calls count, the tool lets the user specify the number of batched segments (along all three world axes: X, Y and Z) to be generated. The number should be specified on a per-game basis to give the best performance. This control gives you the ability to have more efficient batching mechanism that is tailored to your game, than is provided by the built-in Unity solution.

Use it along our other tool, Texture Atlas Generator for even better performance! 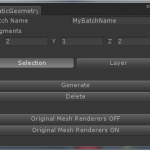 This quick tutorial will show you how to use Static Geometry Batcher step by step.