Game Objects Painter is a tool that allows you to paint prefabs all over your scenes. Prefabs are placed more or less randomly, depending on the values of input parameters that the tool exposes.

The requirement for painting is that objects that prefabs are to be painted on must have collider components attached. 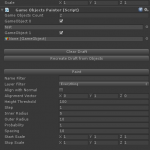 To paint objects you must first create a GameObjectsPainter component instance within some given game object. This game object will be the parent for all objects painted using it.

Painting is achieved by pressing the left mouse button (LMB).

During painting the objects are not actually created in the scene. They are created once you release LMB.

This quick tutorial will show you how to use Game Objects Painter step by step.

Please note that the way the tool paints objects is hard-coded to a high degree. If you have any ideas on what parameters could be exposed to the user or what would make the tool more flexible but still easy to use, please let us know.