Shader Generator is a simple tool that gives its users ability to generate moderately advanced shaders with just a few clicks! If you don’t feel like writing your own shader from scratch this might be something you need.

A similar tool but with less features was used to create beautiful shaders for a hack&slash game called Iesabel.

Features that are exposed by this tool include: 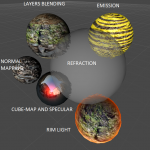 This quick tutorial will show you how to use Shader Generator to generate a simple two-layers diffuse shader, where layers are blender using vertex color, step by step. To make things fancier the second layer will animate (scroll).